I bought a ticket for Saturday and have tentatively booked a hotel. I'm betting that the past lineups I've seen in reviews will be a good indicator of what to expect.
Last edited by kalamazookid on Fri May 04, 2018 12:39 pm, edited 1 time in total.
0 x
Matt
Top

A P-38 Lightning flown by Kevin Eldridge has been added for the Heritage Flight!
0 x
Matt
Top

Checked this for the first time in ages and it's looking really good! B-52, A-4 and lots of warbirds and statics have been added. I updated my original post to include everything listed on the website.

Anyone else going? Still think it's kind of odd to not sell tickets at the gate, but that at least allows the show to plan for the number of people attending. I have a ticket for Saturday.
0 x
Matt
Top

Yeah, they're really starting to improve this show in a hurry, I wasn't really looking forward to this one, but I am now! With all of these good statics now, I am planning on heading across the state early Friday morning to watch arrivals and practices. I do like the online only tickets, makes the entry into the show much better...this one gets VERY crowded, and has been a mess in the past getting in. Last time I went there got some great shots of the QF-4 coming in on static at a spot off the airport, to the East...
David 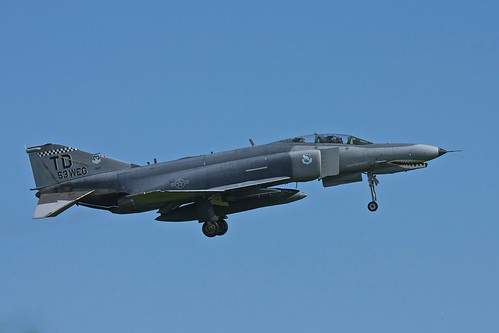 Unless there's a major change in the weather forecast, I will be there Saturday. Here's hoping we don't get any bad weather spinning off from the hurricane.
0 x
Matt
Top

It'll also be interesting to see if statics are better or worse because of the hurricane. Maybe some jets will evac to the show?
0 x
Ryan Sundheimer
www.AirshowStuff.com
Top

RyanS wrote: ↑
Wed Oct 10, 2018 4:59 pm
It'll also be interesting to see if statics are better or worse because of the hurricane. Maybe some jets will evac to the show?

I'm not feeling really optimistic about the military statics, as I'm assuming most of the aircraft will be coming from the east coast. Maybe we'll get lucky.
0 x
Matt
Top

Easily the coldest weather I've ever experienced at an airshow, but a great day anyway! The only major no-shows that I noticed were the P-38 and both P-51s that were listed on the website. The four-ship Heritage Flight they were hoping for didn't happen, but thankfully, Andrew McKenna stepped in and brought his P-51 so the show could still have a Heritage Flight.

One of the most interesting things I've seen this year was the Shaw AFB F-16 demo jet flying in formation with a T-38 from Langley. I'm not sure that this was necessarily a planned part of the show, but it was really cool. Someone around me said that T-38s are going to be added to the Heritage program next year and that the flight was part of the certification process for that. I have no idea if that's actually true, but the profile of the passes that were being flown were exactly what you would see in a Heritage Flight, the only difference being that these were flown at a higher altitude and a bit looser of a formation. Very cool!

The demo jets couldn't do any climbing because of the low ceiling, but the low passes in full afterburner were awesome. I actually enjoy those a lot better than craning my neck to look way up, so no complaints here. The F-16 made lots of extra passes. The A-4 stole the show though. Paul Wood really knows how to get the most out of that aircraft.

Hard to imagine a better show to end the season with (although the temperature could have been warmer). I'll definitely be back in the future.

I'll try to post a few pics at some point this week. I have a point-and-shoot that doesn't like dark days like this, so I'm not sure if I got anything decent.
0 x
Matt
Top
Post Reply
18 posts

Users browsing this forum: No registered users and 4 guests