Your 5 favourite airshow moments of 2018

Your 5 favourite airshow moments of 2018

As the airshow season draws to a close, I thought I'd start a highlights thread for us to share our best memories from the last year. So let's hear your five favourite moments - perhaps a unique aircraft, an immaculately-flown display, a particularly low pass or anything else that just stuck in the memory for whatever reason. Post photos with them too, if you can! Mine are as follows:

1. Pyro Pylon Run in Saudi Arabia, Sep 23: on the rehearsal day for the Saudi Arabia National Day show in Dammam I was out on one of the firework pontoons, launching pyro as Marek Choim few his "pyro pylon run" overhead in his Extra 330. It was just a totally bizzaire experience to be floating on my own, on a platform barely larger than a dining table, underneath an air display as the sun went down. See the view from the shore at 2:25 in the video I linked below.
2. Frecce Tricolori at RIAT, Fri Jul 13: this was the first time I'd seen the Frecce's full good weather show, and WOW it left an impact. It's definitely one of the best choreographed jet team routines around, and was reasonably well-flown too. It was all performed against a dramatic orange sky as the sun began to set. See it at 1:00 in the video.
3. Antonov An-2 at Wings Over Baltics, Sat 4 Aug: probably the most aggressive biplane routine I have ever seen (and yes, I'm including most Pitts displays in that analysis!) It was like the pilot was trying to pull the damn wings off. He was apparently asked to tone it down on day two. There is a short clip at 0:45.
4. GliderFX at the Portugal Air Summit, Sat 26 May: this was the first sunset pyro airshow in Portugal and I was out on the taxyway in front of the crowd when the GliderFX MDM-1 Fox came in for its low pass. Wingtip pyro burning, it passed almost over my head at just a few feet - and I caught it perfectly on camera! It's the closing shot of the video (2:40) below.
5. Ukrainian Su-27 at RIAT, Fri Jul 13: while probably not one of the top displays from RIAT this year, on the opening day there was a pretty memorable moment when the jet came directly at the crowd, very low and with very high alpha. It looked almost like he was just going to fall out of the sky. It's in my video at 1:50.

This is my summary compilation video of the year, which I published a few moments ago. I'm looking forward to hearing what you have all been getting up to, and hopefully seeing some photos and videos too. Now let's see what 2019 brings!

This will be a fun thread. Always interesting to see what people enjoyed the most, especially concerning events and acts I haven't seen before.

Awesome video! Looks like you really got around this year. Looking forward to seeing what others have to contribute when their seasons are over. One more for me ...
0 x
Matt
Top

This was one of the only cool things I could think of. This was when we had just gotten to our campsite at Airventure when the Friday show was happening, and the sound of Texans roaring over you just gives you a good feeling.
0 x
Top

1. Two Tigercats at Oshkosh - I had never seen a Tigercat in person before, so to get to see two fly was amazing.
2. B-1 afterburner combat departure at Oshkosh - Was in the parking lot but it was still impressive.
3. Kalitta Air 747-400F flyby at Thunder Over Michigan - nothing like yankin' and bankin' a 747 low and slow.
4. Wow moments with the Yak 110 and Red Bull Eurocopter at Oshkosh - first time seeing both.
5. Watching SAM 29000 aka Air Force One do touch n goes for half an hour at the Memphis Belle Exhibit Opening, not an airshow but...
0 x
Top

Now that my show season is over, here are my top five.

1. Two Tigercats at Oshkosh. I grew up in Kalamazoo, MI and the Air Zoo Tigercat was always my favorite as a kid. I hadn't seen one fly in 18 years, so getting to see two was pretty special. 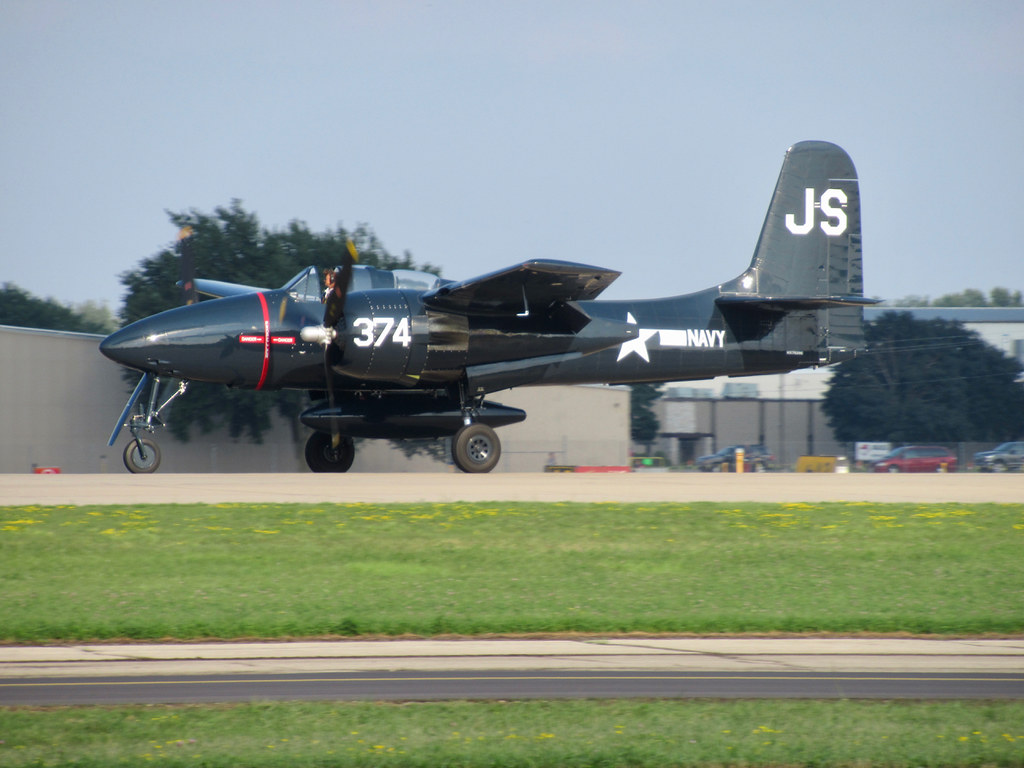 2. Getting to see Dean Cutshall's F-100 two days in a row at Terre Haute. Seeing the F-100 is always a treat. I'm glad I went back Sunday to not only see it fly again, but catch the departure. This was the first time I'd been able to get a good, clear view of it on takeoff and landing too. 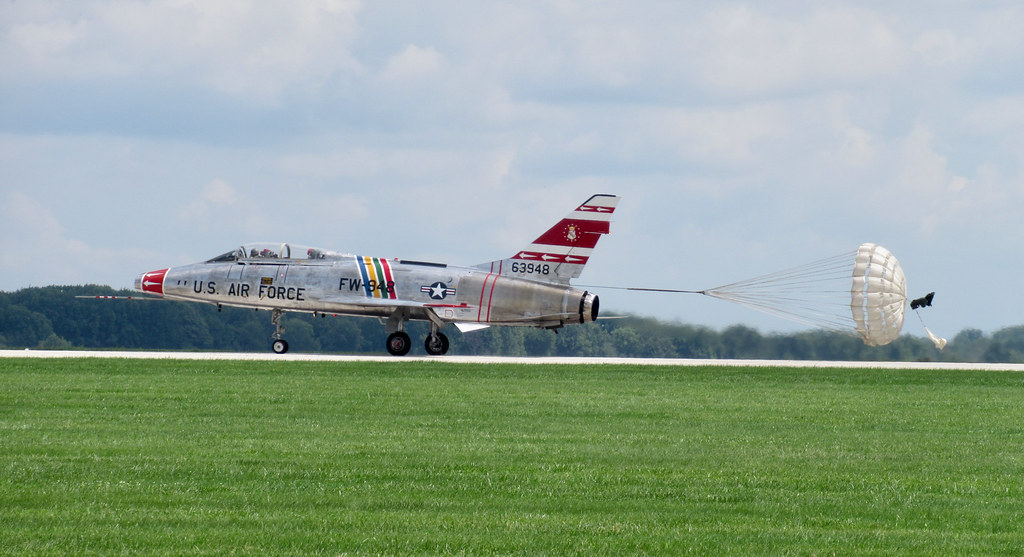 3. Not really an airshow, but I attended a small fly-in on the grass strip in Hagerstown, IN. There's just something nostalgic about seeing biplanes and old airplanes on a grass runway. I also love these small events for how relaxed and friendly they are. 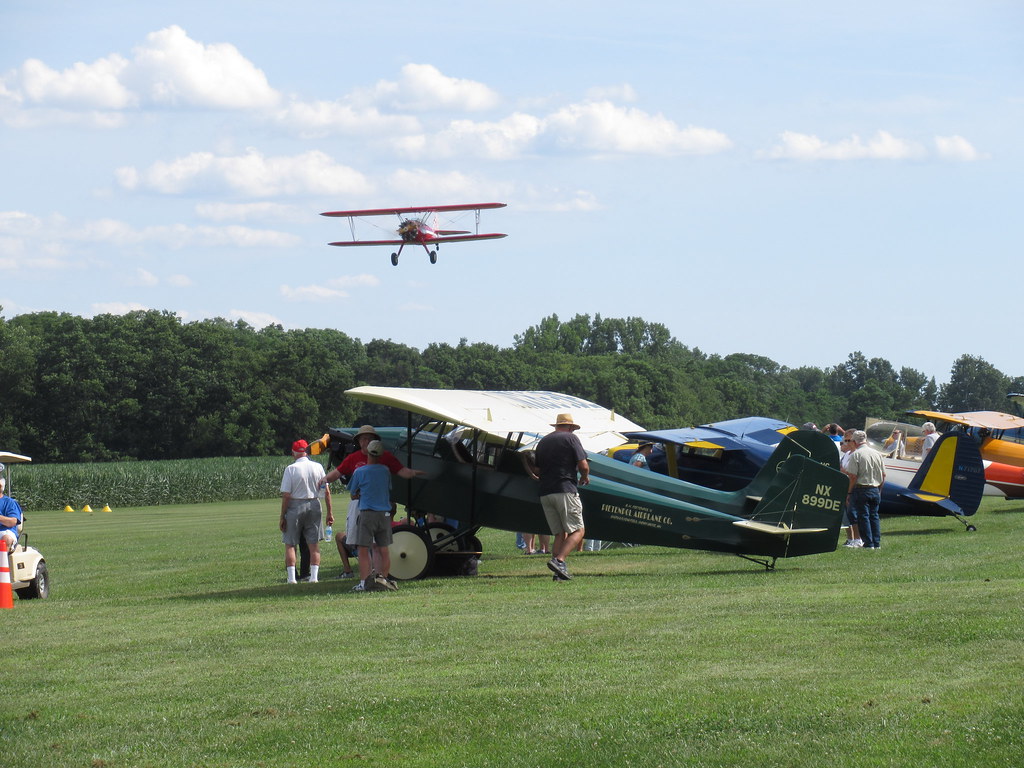 4. The return of Moonbeam McSwine. Another warbird that was a big part of my childhood. It was bittersweet to see it fly in the hands of someone other than Vlado. 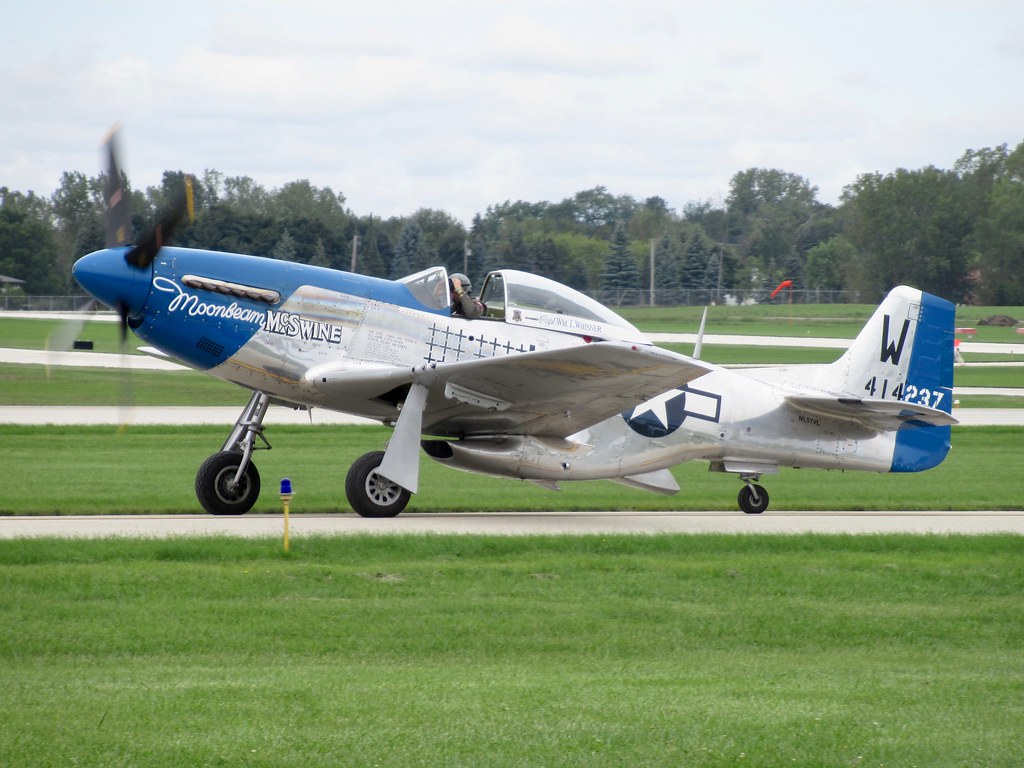 5. Paul Wood's A-4 Skyhawk demo at the Spirit of St. Louis Airshow. Nobody rings out a jet warbird like Paul in the Skyhawk. Just awesome to witness. 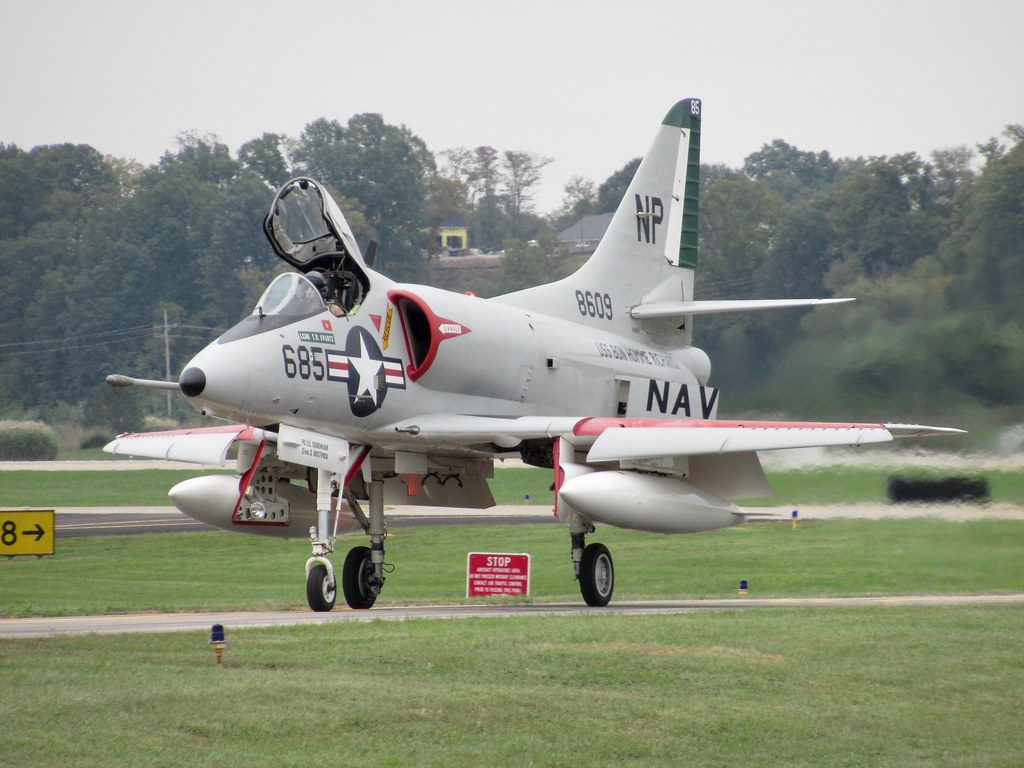 I'm disappointed this thread hasn't gotten more love, maybe I can bump it back to life. My moments naturally come with videos attached

2 - A-26/TBM Photo Flight
Before the Snowbirds flight came together, this was the coolest thing I'd done all year. Still very cool!


3 - Terre Haute Airshow
Terre Haute was extremely good to us this year. Not only was it a big gathering of friends, we had all access and even got to shoot from the pyro box with Tora


4 - B-1B Lancer Night Launch at Oshkosh
Thank god for scanners so we knew to stay behind!


5 - Shockwave torching a van at night
Not only seeing it, but being front row and having a Gopro along for the ride. I can't believe this video hasn't done better.

Over all Cosford was an amazing show and RAF 100 Flypast was one of the best aviation events I have been to.
0 x
Top

2018 was a great year for me since I upgraded my camera from an iPhone 7 Plus to a Canon T6 Rebel. I used my 75-300 MM lens every airshow and was able to see some awesome things!

Don't have any pics pics to go with this, but:

2. C-47 Heritage Flight with C-17 at Charleston, I'm sure the highlight for many people. The size comparison between the two aircraft is stunning. Seeing the C-47, which may be the largest plane at some air shows, look so tiny compared to the Globemaster shows how ridiculously huge that plane is.

3. MAGTF at MCAS Cherry Point, featuring the EA-6B Prowler (possibly for the last time; it's retiring next June). As soon as the aircraft rolled out from the parking ramp, people started cheering for it. It was cool to see the crowd that engaged and aware of what they were seeing without the announcer describing it.

4. Second 747 Dreamlifter at Charleston. The show managed to book the 747 "Dreamlifter" cargo aircraft as a static display. They also got a 787, but it had to cancel. As I pulled up to park my car, a second Dreamlifter took off from the airport. It was unbelieveable to see two of these aircraft at the same place. There are only four in existence.

5. Viper at Myrtle Beach. The F-16 Demo was added to Charleston to make up for the Thunderbirds missing due to their stand down. While the Charleston performance featured a surprise wall of fire, the show at Myrtle Beach featured several extra passes, plus it performed during the opening ceremony with Rob Holland, Mike Wiskus, and the Para-commandos. It must have done at least 5 high speed passes Sunday alone.
0 x
Top

Instead of adding just 5, ill add one for each aviation event I attended this year. So here's part 1, 5 per post.

1. Although not an airshow or aviation event for that matter, I was able to see Air Force One for the first time when the POTUS came to CLT for Billy Grahams funeral. I got a cool shot of AF1 departing with the Charlotte, NC skyline in the background. Not only did I see AF1, but AF2 also arrived minutes before AF1. It was odd to see both 1 & 2 at the same place and at the same time.

2. My first airshow of the year was the Thunder Over Louisville show in Louisville, KY. TOL is a very hard show to watch. Its poorly positioned on the river with tall bridges guarding the box. Its very fun for helicopters (at least it used to be). It has its moments with rare aircraft seldom seen in the air at airshows such as a E-3, Canadian Gonzo and the UPS 747 (which made an ultra sweet banking high speed pass). My favorite moment of the show was watching four USMC choppers swirl around in the late evening as the sun was going down. This show as my friends put it: "you go for the fireworks with an airshow before".

3. Myrtle Beach held its first airshow in years and it didnt disappoint. A stellar lineup with top name aerobatics and plent of warbirds to go around along with the Blue Angels and the F-16 demo team. I only attended friday and sunday as i attended the charleston show on saturday since they were the same weekend. Myrtle had great weather all weekend and awesome afternoon light which allowed me to get some of my best blue angel photos ever.


4. As stated above, i attened the charleston afb airshow on the saturday during this airshow weekend. It was also a stellar show, unfortunately they suffered the loss of the USAF Thunderbirds due to their stand down. the show did a great job of trying to fill in the acts with the F-35 flybys and the aeroshell aerobatic team and also gained a full viper demo by sharing with Myrtle. My favorite act of the show as seeing the prowlers of the pacific. It was a great little performance with a lot of flybys and pyro for the only flying SB2c Helldiver, a SBD dauntless, a P-40 and a replice Kate torpedo bomber.

5. As stated in Awals post above, the highlight for me at the MCAS Cherry Point airshow was seeing the EA-6B Prowler for probably the last time. Ive been lucky enough to see a prowler fly several times at airshows during the years, but it just meant a little more seeing another aircraft that was around when i was a kid and falling in love with aviation disappear into another sunset. Side note: the USMC F-35 put on a hell of a demo. I cant wait to see if they add to it at the MCAS Beaufort show this coming year.