Find out where your favorite performers will be! Be sure to check schedules for updates as they are always subject to change. Also post year-related performer information, such as music lists.
Post Reply
4 posts • Page 1 of 1

They'll be using a special-scheme Chinook to celebrate the type's 40th anniversary in RAF service this year. 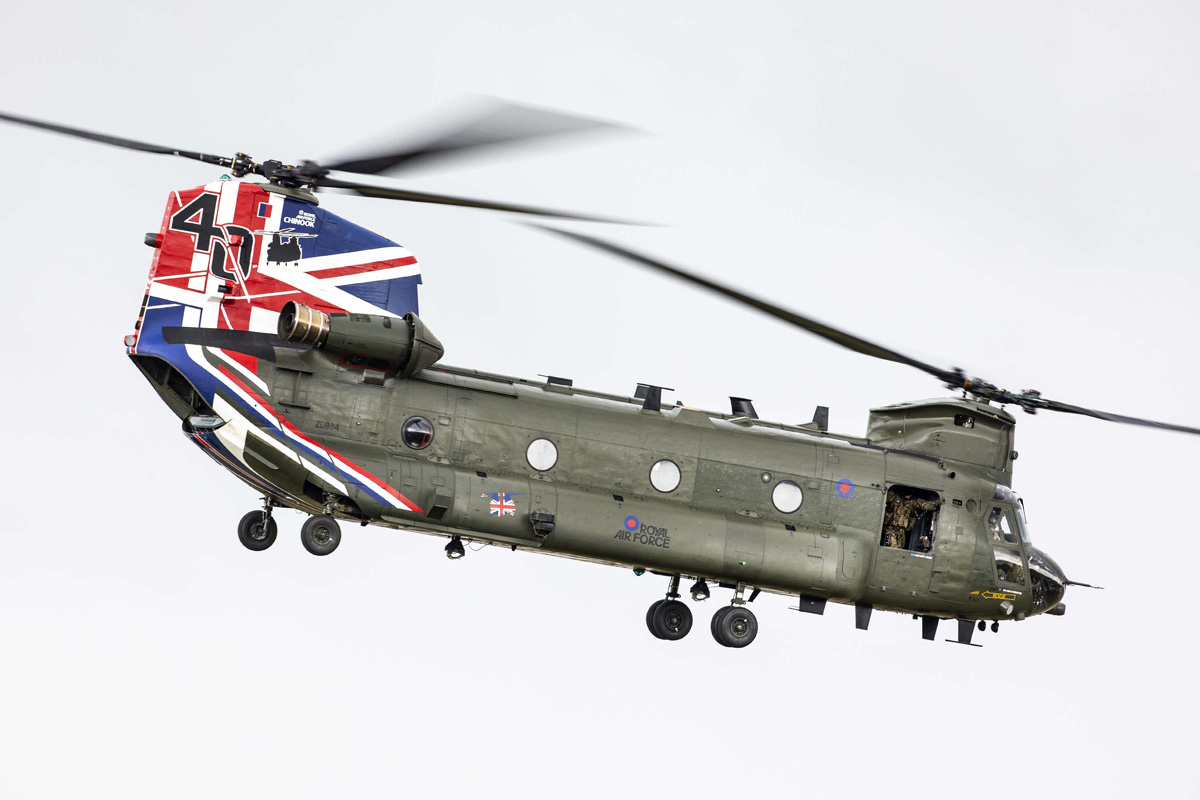 The new colour scheme was unveiled today as the aircraft departed RAF Odiham, the home of the Chinook Force, on a routine training flight. On board was the paint scheme designer and current Chinook pilot Flight Lieutenant Andy Donovan of 27 Squadron, RAF Odiham who said, “It has been a great privilege to rejuvenate special liveries on the Chinook Force over the past five years. For a short time, this aircraft will be the centrepiece around which 40 years of incredible stories can be told. I am personally very proud to be associated with the Chinook and the professionalism displayed by all who contribute to getting this incredible aircraft into the air, wherever it may be needed.”

The commemorative paint scheme was applied during regular scheduled routine maintenance at no additional cost. The design has taken two years of groundwork and engineering preparation before entering the paint bay at RAF Odiham. A dedicated team from Serco have worked over several weeks to apply the special commemorative livery.

The Boeing CH-47 Chinook Helicopter entered RAF service on the 22nd November 1980. Throughout its 40 years of service the Chinook has made an immeasurable contribution to the Service, supporting communities across the UK and operating in every major conflict since the Falklands War.
Commander of the Joint Helicopter Command Air Vice Marshal Nigel Colman OBE said, “For most of its time in Service, the RAF Chinook has been part of the Joint Helicopter Command where its incredible capability has been in great demand, both at home and overseas. All those involved with Chinook operations, both past and present, should take great pride in what they have achieved. The Chinook will continue to be a familiar sight and sound in the years ahead and we all look forward to the next chapter in the Chinook’s illustrious history.”

RAF Odiham Station Commander Group Captain Nick Knight OBE MA said, “Since receiving the Chinook in 1980, its contribution to Defence has been profound. From first deployment to the Falklands to current operations in West Africa, the Chinook has continually delivered on operations. Offering a capability second to none, the Chinook emotes a sense of pride built on this long and illustrious history. I am privileged to fly this iconic aircraft and also Command the Chinook Force - I look forward to seeing the Chinook play an equally important role as part of the next generation RAF."

The newly painted aircraft, ZD984, has re-entered 27 Squadron’s fleet at RAF Odiham and will resume essential routine training for operations in the UK and overseas. The painted Chinook will support the RAF Chinook Display Team’s season and commemorative events throughout 2021.

Officer Commanding 18(B) Squadron and Chinook 40 Project Officer, Wing Commander Matt Roberts OBE DFC said, “It has been a privilege to help RAF Odiham look back on 40 proud years of Chinook operations. The overriding feature of this period of reflection has been the selfless dedication of the men and women who have served their country getting these magnificent helicopters into the air. Moreover, 40 years of history points to one main theme - support to the boots on the ground. We are rightly proud of our history and excited about our future, but we remain focused on the support to the troops both now and in the years to come.”

Paul McCarter, Managing Director of Serco’s Defence business, said: “Our Surface Finish teams operate at RAF bases across the UK where they work and provide a superb service to help keep the RAF’s fleet flying. I am particularly proud of the expertise the Surface Finish teams have contributed towards the celebration of the 40th anniversary of the Chinook entering service with the RAF.”

Users browsing this forum: No registered users and 3 guests